"Cornell Cooperative Extension (CCE) has a strong, ongoing commitment to diversity, equity and inclusion in our work to serve an increasingly diverse New York State population. We affirm and remain committed to actively creating and sustaining a culture of belonging that embraces a diverse workforce, volunteer base and program audiences. We recognize that personal and collective action is required to move our vision of belonging from the aspirational to the everyday experience of all members of our community. In doing so, we tirelessly strive to foster an organizational climate of belonging where individuals from diverse backgrounds and life experiences can fully contribute and thrive. We firmly believe that an emphasis on belonging in CCE’s strategic planning will maximize our capacity to create and innovate as we best serve the emerging needs of communities throughout New York State." - Excerpt from the Cornell Cooperative Extension Director's Statement of Commitment to Diversity from the 2020 CCE Association Affirmative Action, Diversity, and Inclusion Plan

Click here to see the full statement from Chris Watkins, Director of Cornell Cooperative Extension and Associate Dean of College of Agriculture & Life Sciences and College of Human Ecology. 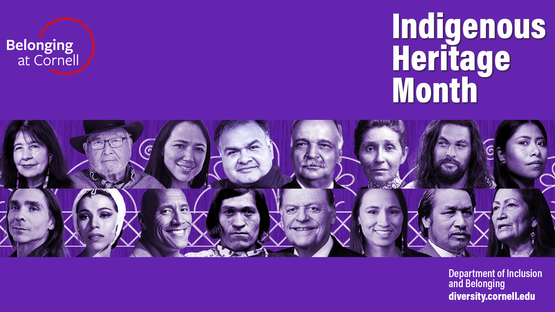 What started at the turn of the century as an effort to gain a day of recognition for the significant contributions the first Americans made to the establishment and growth of the U.S., has resulted in a whole month being designated for that purpose.

One of the very proponents of an American Indian Day was Dr. Arthur C. Parker, a Seneca Indian, who was the director of the Museum of Arts and Science in Rochester, N.Y. He persuaded the Boy Scouts of America to set aside a day for the “First Americans” and for three years they adopted such a day. In 1915, the annual Congress of the American Indian Association meeting in Lawrence, Kans., formally approved a plan concerning American Indian Day. It directed its president, Rev. Sherman Coolidge, an Arapahoe, to call upon the country to observe such a day. Coolidge issued a proclamation on Sept. 28, 1915, which declared the second Saturday of each May as an American Indian Day and contained the first formal appeal for recognition of Indians as citizens.

The year before this proclamation was issued, Red Fox James, a Blackfoot Indian, rode horseback from state to state seeking approval for a day to honor Indians. On December 14, 1915, he presented the endorsements of 24 state governments at the White House. There is no record, however, of such a national day being proclaimed. Read more...

This page is a curation of resources to aid our work on creating and sustaining a culture of belonging at CCE. Please share and check back often.

Resources for Parents and Children

31 Children's books to support conversations on race, racism and resistance

How to Talk to Kids about Race and Racism

Resources for Talking About Race, Racism and Racialized Violence with Kids

Coming Together: Standing Up to Racism. A CNN/Sesame Street Town Hall for Kids and Families

Why a White Space

The Characteristics of White Supremacy Culture

Me and White Supremacy

How Race Was Made

This Land Was Our Land

Post Traumatic Slave Syndrome. How Is It Different From PTSD?

A conversation with President Obama: Reimagining Policing in the Wake of Continued Police Violence

Birth of a White Nation

The Disturbing History of the Suburbs

I’m Am Not Your Negro

When They See Us

Race: The Power of an Illusion

How to Make this Moment the Turning Point for Real Change

The racist roots of American policing: From slave patrols to traffic stops

Bryan Stevenson on the Frustration Behind the George Floyd Protests

Amy Cooper, White Privilege and the Murder of Black People

The Destructive Power of Despair

Between the World and Me by Ta-Nehisi Coates

How to Be an Antiracist by Ibram X. Kendi

Why Are All the Black Kids Sitting Together in the Cafeteria?: And Other Conversations About Race by Beverly Daniel Tatum

The Warmth of Other Suns: The Epic Story of America's Great Migration by Isabel Wilkerson

The Person You Mean to Be: How Good People Fight Bias by Dolly Chugh

My Grandmother's Hands: Racialized Trauma and the Pathway to Mending Our Hearts and Bodies by Resmaa Menakem